You have an item that is returned in a JSON list but rather than being in a specific location in the list i.e. foo.[2].bar - it could be in any location in the list. Using a filter to identify the item, and then extracting that as a variable is how we handle this scenario.

The Assertion checks syntax uses a cut-down version of the Jinja templating library to parse the data, which allows for some filters (marked by |) and tests as well as the direct dot-notation syntax.

For example, consider the following JSON:

In this JSON, the headers are in a list. If that list is always in the same order, you can use the regular notation to find the value associated with the key Interaction-Id﻿:

However, if this list is not in a guaranteed order, you need to use filters and tests to get the value you require.

In the above example, to get the Interaction-Id, you'd use the following assertion:

More information on the filters is available in the Jinja templating library documentation. A selection of useful filters include:

Tests are used as part of the filters. More information on the tests is available in the Jinja templating library documentation. A selection of useful tests include:

In this example, we have a sample returned JSON list where we want to find the Interaction ID and extract that as a variable for use in another call. 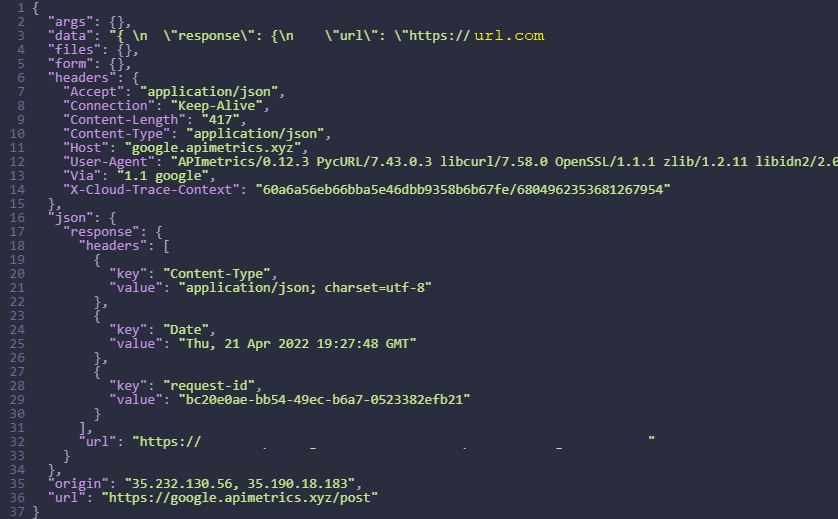 The first step is to set up an assertion check to create a filter and check that the item exists.

We do this in the 'assertions' section of the API edit pane.

We set the ASSERTION to test it exists using the filter string in the test, thus:

We then add the command to EXTRACT the value: First we set the search criteria to find the value Interaction id.

And then set the EXTRACT conditions to set the variable you use.

Your assertions section of the edit pane should look something like this:

When the API call is run, the variable INTERACTION_ID is set to the value of the Interaction id in the returned JSON.